A couple of months ago at a lighting store where I saw a sign that said, “Lights, 25% off.”  The sign wasn’t entirely accurate as about 50% of the lightbulbs were off.

Do you ever wonder what goes through a lightbulb’s head when you’re about to turn it off?  Please say no.  That would just be silly.  It’s just an electrical device that we created to give us light.  Lightbulbs have no feelings; they have no cognitive thought.

We don’t hesitate to flick on and off a switch on a lightbulb; we feel no pain letting all the light from the device dissipate into darkness.  How would you feel turning off a robot that you could relate to?

The higher the capacity or ability an animal has of communicating or bonding with us, the greater value and the more attached we are to those animals.  That is why our society views the consumption of different kinds of animals differently.  People who are willing to eat cow meat may not be willing to eat cat or dog meat.  In a sense, we are more willing to switch one animal off than another.

Machines already have the ability to measure our preferences and to feed us images and information that we are more likely to be interested in.   The more time goes by, the more ability we have to build robots that are able to communicate with us at a level that we want to.  So it’s not unthinkable that we will have robots that we become attached to.  How would you feel turning off that kind of machine?

I’m guessing you would still have no problem turning off the robot.  After all, a robot isn’t a living thing like a cat or a dog.  But what if it was?  What if the robot was self-aware, able to think for itself, and had its own preferences and desires?  What if it had intelligence that surpassed our own, and it didn’t wish to be turned off?  Would you still be easily able to press the button to power it off?

The more human-like something is—the more intelligent it is or the more ability it has to relate to us—the more likely we are to make moral judgements regarding it.  That is why someone can get charged for animal cruelty for torturing a cat, but not a spider.  This is a healthy mindset, because we are using humanity as a measure of value.  We need to, because we need to believe that we have value.  So it’s only natural and reasonable that moral questions regarding artificial intelligence are raised the closer they come to our level.

Personally, I believe that it’s great that we have moral concerns on how we treat other intelligent life forms.  While I don’t necessarily believe that the act of harming an animal is inherently wrong, I do believe our willingness to do so says a lot about the condition of our heart.  If we are so willing to do harm to something that we can relate to, that may be an indicator of our feelings regarding other human beings.  Whether we’d like to admit it or not, other human beings are the ones that we can relate to more than any other thing.

We’ve grown accustomed to using humanity as the backbone of how we make judgements.  That can be great and helpful, but it can also be very limiting.

Even if we prefer to think otherwise, we humans are not the highest form of intelligence in play in our lives.  God is.  Many of us realize this, and we do our best to relate to God, which is great.  However, since we are conditioned to relating to others on our own level, we try to do the same thing with God.  This eventually leads to us judging God according to His treatment of us.

I’ll be the first to admit that there are many things that God does that I don’t agree with.  I believe that this part of our relationship is natural and there’s nothing wrong with it.  However, I often cross the line when I become angry or resentful towards God.  I let my disagreements with Him go to the extent where I make the judgement that what He is doing is wrong.  That is the part that is wrong.  God is so much higher than us, and He has the right to do what He wants in relation to us since He created us.

If I developed a robot to do as I wished, and I gave it the ability to make judgements for itself, I would say I had the right to turn it off because that ability to turn it off was part of my purpose in its design.  Its complaints may affect me on an emotional level because of its ability to communicate with me, but that wouldn’t change my inherent right to do with it as I wished.

I’m not trying to paint the picture of an uncaring God playing with us like we play with toys.  God created us in his image, just like we are creating robots in our own.  That means that God has designed us for the purpose of relating to us.  God wants to relate to us.  God wants to have a relationship with us.

Just as the more we are able to relate to something, such as with a dog or a robot programmed to our preferences, the more we are pained to take life away from it, so God is affected at a greater level when something bad happens to us.

I began this post with a question of what a lightbulb may say before it is turned off (actually, I began the post with a lame joke, but that’s besides the point).  What may be a more appropriate question to ask is what the lightbulb would have to say after being turned on.  After all, if you are reading this, it means that you have been blessed with the opportunity to live a life according to purpose for which you have been made.  Not only has God not yet hit the “off” switch on you, but He has in a sense powered you on. I don’t know about you, but to me there’s no greater joy than being able to fulfill the purpose for which I have been made.
Posted by Stephen Selke at 22:39 No comments:

The Right Way to Save the World

The two most recent Marvel plotlines that I watched were the latest season of the television series Agents of S.H.I.E.L.D. and the movie X-Men Apocalypse.  Both the movie and the TV series featured their own villain who was compared to a god and who aimed to gain control of the minds of everyone on Earth.  “Apocalypse” was a powerful ancient mutant who was going to transfer his soul/being into a psychic in order to use his powers to telepathically take over minds.  “Hive,” enemy of SHIELD, was going to use his parasitic nature to infest everyone in a planet.  They were formidable enemies with people with special abilities coming up against them to stop them.  My kind of stories! 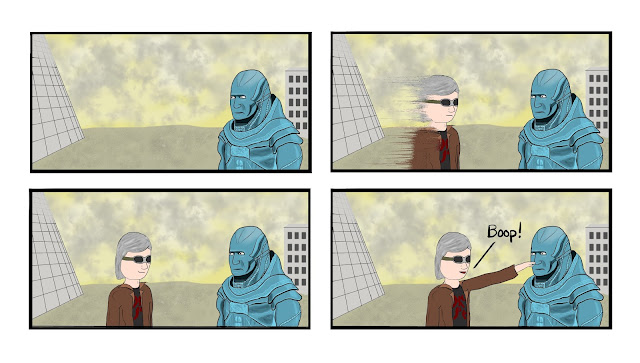 I’m going to ask a question that may seem strange to you.  Would it really have been so bad if the bad guy had won?  When you think of it, if they had won, the citizens of the planet would not be unhappy.  In the case of Apocalypse, the thoughts that they would be thinking wouldn’t be their own, and they would all be co-operating.  In the case of “Hive,” not only would the people be co-operating, but the parasite infesting their mind would keep them in a perpetual euphoric state of bliss.  Isn’t happiness all we want in the end?

Don’t get me wrong, I was rooting for the good guys in both Marvel stories as neither antagonist offered the ideal end game.  It’s interesting, though, when we look at what we have against the bad guys in the context of our real world question of evil.  Even the most faithful among us at times ask the question, “if God is good, why does he let evil happen?”

The answer lies in the concept of free will.  In giving us free will, God was giving us the ability to choose to not obey him.  That disobedience is how evil entered the world.  If we truly wanted all evil and suffering to end on this planet, the thing that would be necessary would be for God to take away enough of our free will that we no longer had the ability to make the mistakes that caused the suffering.

If the Marvel bad guys had won, they would have done something similar.  They would have taken away humanity’s free will and have everyone living together in harmony.  Do you recognize the biggest thing wrong with that picture?

Whether or not you believe that God was the one who gave us it, it’s obvious to most of us that having free will is part of what it means to be human; taking away our freedom to make our own choices is taking away from our humanity.

So what’s the point of it all if we can’t achieve a society in which we have both free will and an absence of pain and suffering?  Are we resorted to merely just doing what we can and hoping for the best?

Unfortunately, while we dwell in our mortal shells, things aren’t looking up.  If there is an answer that allows one to achieve a perfect society while holding on to both free will and our humanity as we scientifically define it, I would like to hear it.

The end game presented in the Bible shows one where we can achieve utopia without necessarily giving up free will.  Yes, it does happen after our physical body dies, but I would argue that with our new bodies we are not less human, but more.

According to the Bible, we were giving free will, but we were ultimately meant to use our free will to choose God.  We designed so that we would get the ultimate amount of satisfaction and happiness the closer we got to God.  The reason that so many choose paths away from God is because it’s a much easier task to focus on the tangible and grasp for the happiness that we can see and understand.  Even though the happiness God offers extends far past the physical, pursuit of it often means giving up lesser but more visible pleasures.  The reason I said that with our new bodies we would be more human is because in this form we will have less ties to the things that tempt us to reject God, thus giving us a greater ability to do what we were created to do.

Heaven is designed so that we may gain the pleasure that we were created to feel.  In Heaven we will know the joy of being in close proximity and close relationship with God.  We will have our free will and choose to be perfect for the same reason that God chooses to be perfect.  When one already has obtained ultimate satisfaction and happiness, one has no desire to change that state, even when one has the free will to.

Both Marvel’s Agents of S.H.I.E.L.D. and X-Men Apocalypse have suggested the ancient super beings in their narratives have inspired passages of the Bible.  What they didn’t mention was that further examination of the mysterious and ancient biblical pages would reveal that regardless of how awesome the god-like beings Apocalypse and Hive were, they had nothing on the God will ultimately conquer the world and defeat evil.
Posted by Stephen Selke at 21:32 No comments: