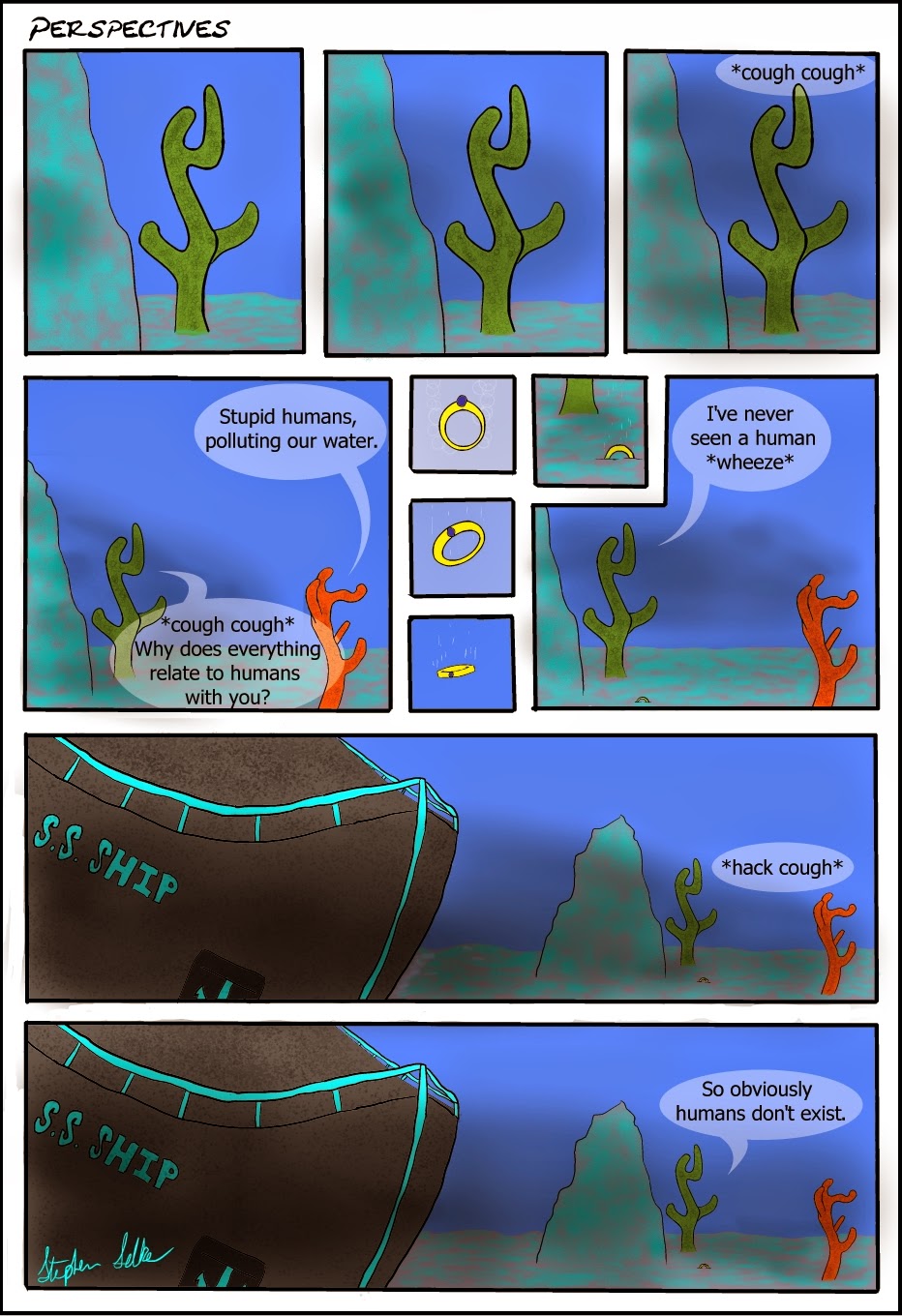 This comic is all in good fun.  You can tell by how sloppily some of the comic looks that I didn't mean for it to be taken too seriously.

On my rough draft I have the conversation going as follows:

"How do you explain your sickness without the existence of humans?"

"Just because I don't understand, it doesn't mean that there are humans.  I'm sure we'll figure out where this pollution came from eventually."

In case you haven't figured it out, this is a parody of atheists denying the existence of God.  After all, they feel quite free to make fun of religious people, I thought I'd poke a little fun of my own.

For all of you, whether you be a theist, atheist, or agnostic, I have one thing I want to say.  We as humans need to come to the best conclusion that we can given the evidence.  Don't fit the evidence to your beliefs, but fit your beliefs to the evidence.  Just because you would like to believe something, doesn't make it true.
Posted by Stephen Selke at 19:46 No comments:


Why Did Jesus Have To Die?


Spoiler alert - Jesus rose from the dead after he died.  However, the question why he had to die in the first place was asked of me a few years ago, and I figured being as it was Easter week it was as good as time as any to finally attempt to answer it.

Certainly God could have chosen a less violent way to reconcile humankind to himself, right?


In order to explore this issue it is important that we begin at the beginning, or very close to it.  Adam and Eve sinned, disobeyed God, and therefore separated themselves from God.  Imperfect humans couldn't coincide with a perfect God.


Why couldn't God forgive Adam and Eve right then and there?

I believe we need to back up even more to answer this question.

Genesis 2:16-17 -  And the Lord God commanded the man, “You are free to eat from any tree in the garden;  but you must not eat from the tree of the knowledge of good and evil, for when you eat from it you will certainly die.”

God is the most holy and righteous one.  Greater than all others, an offense against God is the greatest kind of offense.  An offense of this magnitude demands a punishment of greatest significance.  The most significant punishment given to a life with God is the opposite - a life apart from God.

Why did Eve not die the instant she bit into the fruit?

After all, did God not say that the punishment would be death?

What Eve didn't understand was that the most significant punishment against God wasn't merely a physical death, but an eternity spent apart from His glory.  Physical death is the thing that best represents this separation from God.  However, there is much more to death than physical death, for we are more than physical bodies.

Each human has a soul, a spiritual essence that supersedes the physical realm.  Bodies are mortal, not made to last forever in and of themselves (but apparently one could have lived forever by eating of the tree of life - Genesis 3:22).  However, because our souls are not physical objects, they cannot die in the same way physical objects can.

The death that Adam and Eve brought onto themselves the day they ate of the fruit of the tree of the  knowledge of good and evil was a spiritual death.

The reason God couldn't outright forgive Adam and Eve then and there is because they committed the worst possible offense, and God being a just God needed to carry out the punishment.

This isn't to say that God couldn't forgive Adam and Eve at all.  Their sin made a punishment necessary, but what if someone took their punishment for them?  That way God could be both just and forgiving.


What could act as a substitute?

The problem was that the substitute to take the punishment of death would be hard to come by.  The death of animals was commanded by God because it was the best physical representation of the consequences of one's offense against Him without any humans actually having to die.

But animals weren't made in the image of God like man was.  Even the deaths of thousands of them would not be enough to act as a substitute for God to punish in order to forgive Adam and Eve.

The reason God couldn't take one average human to be the substitute for the sins of everybody is because this human would deserve this death.  It couldn't be a substitute if it deserved the punishment it was getting.  A person on death row cannot take the place of someone else on death row.

The substitute had to be worthy - made in the image of God.  It also had to be undeserving of the punishment.

Being as it was humans who deserved to punished, God decided it was best to have a human to be the substitute.  After all, what would be more just:  punishing a newly created perfect being made in the image of God, or punishing a member of the very race that deserved the punishment?

But why God's son?

Why couldn't God just choose to pick a member of the human race and choose to make him or her perfect and sinless from conception, using them as the substitute for our sins?

As far as I can see, doing this would in a sense be taking away from the person's humanity.  After all, part of being human means having free-will, and if a human was created perfect, they wouldn't have a choice but to be sinless.


Jesus was simply the best option.

When Jesus was born of a virgin, he inherited humanity without inheriting the punishment due to all humans as he wasn't born through Adam's seed but through the power of the Holy Spirit.

"But wait, Stephen, didn't you say the ultimate punishment was life apart from God?  How could Jesus experience this if he was God?"  If a similar question hadn't popped up in your head at one point in your life, you haven't thought hard enough about the issue.

The Bible depicts on multiple occasions as Jesus praying.  This is best understood when one also understands the Trinity.

God is one in being, but three in person.  Recently I've heard it explained this way:  who Jesus is differs from what he is.  What is he?  God.  Who is he?  The member of the trinity underneath the Father and empowered by the Holy Spirit.  It's different with us humans, as the "who" and "what" we are as individuals remain the same.

Further research shows that another meaning of the word of "sabachthani" is something along the lines of "thou hast left me."

Jesus was in his final moments, saw his death and separation from God were imminent, and so he was likely crying out because he didn't enjoy what he saw (it is also worth mentioning that these words are also a quote from Psalm 22 which has a lot to do with Christ on the cross).

One advantage among many of having Jesus as our substitute for the punishment of our sins is that he only had to endure the separation for a moment.  Perhaps the moment felt like an eternity, but because Jesus is God, and the fullness of his goodness reaches infinity, the punishment that was also infinite in nature could be fulfilled without Jesus having to disappear forever.

At this point, I hope I have answered the question.

I will choose to go on out of my own further interest.  Please let me know what you think about this.


If Jesus didn't have to endure eternity apart from God like we would have had to because he is eternally good (am I at least right so far?), why did he have to endure three days?

There seems to be quite a bit of uncertainty of what happened after Jesus died.  Here's my stab at it.  Granted, it's a loosely made theory at best, but it makes sense to me.

Luke 23:43 depicts Jesus telling a criminal who was being crucified next to him, "today you will be with me in paradise."  How could this stand true if Jesus spent three days in hell, as many people believe?

The way I see it, if Jesus only needed to endure the separation for a small moment to take our punishment, then there is a good chance that's the only time the separation took.

I don't believe in purgatory, but I do believe in the waiting grounds of sorts where fallen angels and humans go to wait to be judged (see my article on "The Afterlife" and scroll down to "The Waiting Grounds" if I lost you at this point).  Jesus went to these waiting grounds after he died and (from the paradise side) preached across the chasm to people in Hades - depicted in 1 Peter 3:18-20.

Even if you can't accept this last little bit, the important part to believe is that not only did Jesus die in our place, but he rose again.  He stands victorious over death, and because of this so can we.  Let us all thank Jesus for his sacrifice by accepting him as our Saviour and King!


I realize that my article on this topic could have filled an entire book, and so I may have missed key components.  So, as with all my posts, I welcome input:  whether its criticism, questions, things to add, etc.
Posted by Stephen Selke at 19:04 No comments: